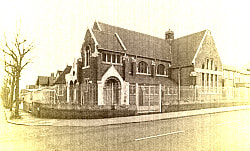 The building was the former St George's Presbyterian Church and was originally designed by J.P.Osborne in a cruciform shape in 1896. Shree Geeta Bhawan Mandir was opened in 1969 and since then we have made many improvements and adaptation to suit our cultural needs.

Shree Geeta Bhawan Building Architecture and Design shown above was approved and implemented in year 2009.